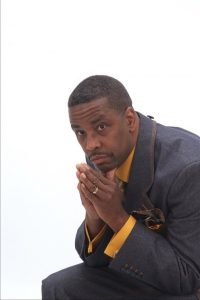 Rodney Posey, a native of Cincinnati Ohio was called to the ministry at the age of 27 to preach God’s word. He was ordained an Elder in the Church of God in Christ International in 1985 under the leadership of the late Bishop William Morgan James.

Pastor Posey is an international recording artist and has released four recording projects and produced one, The Storm is Over, Live in Praise and Worship with the Whitfield Company, El Shaddai, A Decade of Anointed Praise with the Ninth Street Baptist Church and his latest, A New Song of Worship. Pastor Posey was a stellar Award Nominee in 1995 and an Image Maker Award Winner (Music Category) in 2001. Pastor Posey is an accomplished songwriter, and has written over 100 songs, one of which was recorded by the likes of Grammy Award winner Hezekiah Walker and the Love Fellowship Crusade Choir. In addition Pastor Posey has had the privilege of working with such renowned producers Donald Lawrence, Fred Hammond and Cedric Thompson.

Rodney’s most recent calling has been to Pastor the Impact Worship Center. Rodney and his wife Teretha launched this ministry on April 6, 2003 in dynamic fashion with Pastor Posey laying out the vision for the ministry. God has given Pastor Posey the vision of individuals being empowered to walk in God’s purpose so that they can impact their environment with the Word of God and a Lifestyle of Worship. The result being thousands of individuals yielding to the will of God and experiencing a tremendous change in their lives. The theme of the ministry is impacting the masses with a lifestyle of Worship.

The Posey’s have one daughter, Trina Posey who has also joined with her parents in impacting her environment with a lifestyle of Worship.